10 Completely Unique Mohawks You Should Quietly Copy. No One Will Ever Know. We Won’t Tell. Once reserved for punk rockers new wavers and other derelicts, the Mohawk has become as mainstream as Dockers with a plaid shirt. In fact, it was the most popular style for men in 2015, but just because it’s hit mediocrity doesn’t mean stylists can’t use their imagination and give you a 21st century spin on the mo’. Yep, nowadays you need to go way out on a limb and get extremely wild to garner attention, positive or negative. This is an achievable goal, but it is not as easy as it used to be.

Back in the day, the people who sported the Mohawk usually dressed in ripped up shirts, combat boots and were pierced in every place imaginable. These days tats, piercings and ripped jeans are par for the coarse. Here are some Hawks that will make you stand out from the crowd. Ok, so I told you that you have to be bold to garner the attention you crave and you will definitely achieve that with the Lizard hawk. This is a pretty elaborate ‘do and not suitable for wallflowers. You must have a strong sense of yourself to wear your hair in this way. This ‘mo looks best on blondes for the simple reason, you can actually see the braid. Again, this takes a lot of upkeep and knowing how to braid your hair is essential. A friend of mine had this exact same cut while we were in college and it usually took him an hour to get ready. Just giving you a heads up in case you were considering getting this cut. Most of the men I know, if they were to get a Mohawk, this is most likely the one they would get. It’s safe and acceptable in most circles instead of edgy and rebellious. This is the better known Mohawk – shaved sides, extra long hair up top with a ton of rock hard gel to hold it in place. While this style has been around for a few decades, it’s still gawk-able. Akin to a fade, this Mohawk gives you shaved sides and longer hair up top which is perfectly suitable for the office. Flashback to the Flock of Seagulls, this ‘mo is a bit retro, but everything eventually comes back in style. If you thought that your curly hair ruled out your shot at joining the Mohawk club, think again. Although you will go through gel faster than toothpaste, a ‘mo is still in the cards for you curly tops. Like the guys with super curls, wavy hair takes a lot of gel (and time) to hold in place. The good thing about this Mohawk is that you can achieve more than just one look, making it the most versatile ‘mo in the bunch. In most cases, a haircut is just another expense that must be accounted for every after a few months. Some people even opt to cut their own hair as ask their friends to do the haircut to save money. But on the other end of the spectrum, there are... 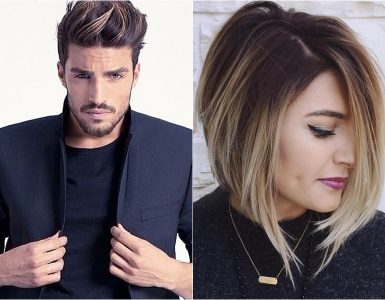 Sorry to break it to you, but there are some hairstyles that just do not look good if you’re a man. And there are plenty of men’s haircuts that will just look unpleasant on a woman. But the reverse is true as well, and that’s what we’re here to talk...